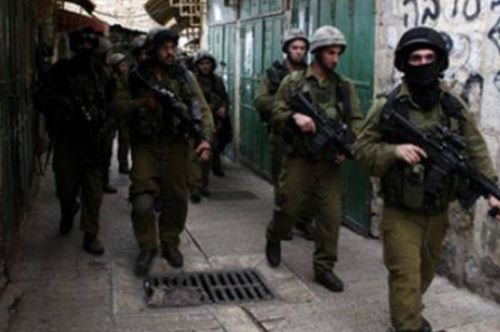 Soldiers also invaded a religious court in the Old City of Hebron, and kidnapped resident Ibrahim Ishaq al-Khatib, 23, while holding his wedding ceremony.

Army also invaded the towns of Ethna and Yatta, installed roadblocks at the northern entrance of Hebron city, and the entrances of Sa’ir and Halhoul towns, before stopping dozens of cars, and searched them while inspecting the ID cards of the passengers.

The two have been identified as, the local mosque’s Imam Sheikh Yousef Jaber, and Sa’ad Darwish, the brother of Saje Darwish, who was shot and killed by the Israeli army on March 10, 2014. http://www.imemc.org/article/67217

In related news, several soldiers and Israeli extremists invaded the yards of the Al-Aqsa Mosque, in occupied Jerusalem, and kidnapped a woman identified as Om Radwan ‘Amro, near Bab Hatta, one of the gates leading to the mosque.

The woman was kidnapped after several Israeli fanatics stormed the yards of the Mosque, and conducted provocative acts targeting Muslim worshipers.

Earlier on Monday morning, small groups of Israeli fanatics, accompanied by police Special Forces, broke into the yards of the Mosque, through the Magharba Gate.

The Police also continued its policy of withholding the ID cards of young Palestinian men and woman, before allowing them to enter the mosque.

Abdullah al-Hajj, head of the Jaloud village council, said the soldiers bulldozed a land, south of the village, adding that the land is near Akhya and Esh Kodesh settlements.