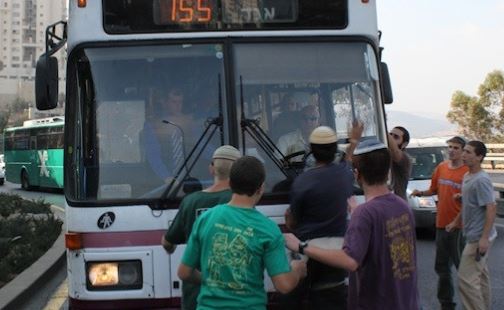 A number of extremist Israeli settlers attacked, on Saturday at night, a Palestinian bus driver, working for the Egged Bus Company, after boarding his bus in occupied Jerusalem. The man is from Beit Jala city, in the Bethlehem district. The driver, Nicola Awad Ghneim, told the Radio Bethlehem 2000 that approximately at 9:10 on Saturday at night he was driving from Ramat Shlomo, near Shu’fat north of occupied Jerusalem, and when he stopped at a junction, five young Israelis boarded the bus.

“Just before I reached the Strauss Junction, two of them approached me, and one asked where I was from, I answered in Hebrew as I didn’t want trouble,” Nicola said, “The settler then accused me of being a terrorist, from what he called Sur Baher terrorist area, in Jerusalem.”

Nicola added that the settler then shouted, calling the four other settlers who were sitting in the back seat of the bus, and they started beating him while he was still driving.

“When we reached the last junction, they dragged me out of the bus, and started kicking and punching me, causing a slight fracture in my ribcage and various bruises,” he said, “They were shouting at me, telling me they are going to stab me to death.”

He also said that a Police car happened to be driving in the area, and that he shouted and asked the police to stop; the officers captured only one, and allowed the rest to run away.

Nicola was moved to Shaare Zedek Israeli Hospital in Jerusalem, and when he was discharged, the Police told him they apprehended a settler testified that it was I who attacked them, but confirmed that a religious Jewish man, witnessed the incident, and is willing to testify.

“I have no doubt in my mind; they wanted to kill me when they realized I am an Arab man,” he said.