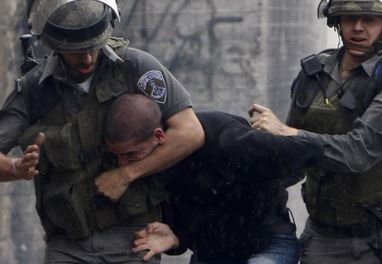 Bethlehem – Israeli soldiers kidnapped, on Tuesday morning, two young Palestinian men, near Teqoua’ illegal Israeli settlement, allegedly after the army found out one of them carried a knife.The two were taken prisoner close to the settlement, illegally built on Palestinian lands belonging to Teqoua’ Palestinian town, east of Bethlehem.

The Israeli military claimed the two “confessed” during interrogation that they intended to stab Israeli settlers.
The two Palestinians, who remained unidentified, have been moved to an Israeli Internal Security center for further interrogation.

In related news, an Israeli settlement bus driver claimed, Tuesday, his vehicle came under fired near Sinjel Palestinian village, close to the illegal settlements of Ofra and Shilo, built on Palestinian lands in the central West Bank district of Ramallah.

Israeli soldiers said the shooting led to minor damages in the bus, but no injuries, and that the army is still trying to decide whether it was gunfire that struck the bus or stones.

In addition, the army said that two windows of a settlement bus were damaged, when Palestinian youths hurled stones at it in the at-Tour area, in occupied Jerusalem.

Medical sources said a settler was mildly injured; the army conducted a search campaign in the area.