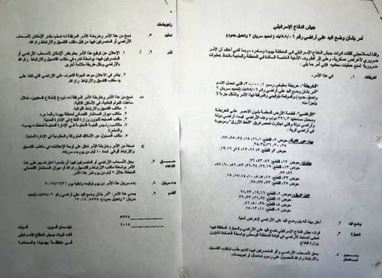 In what seems to be an attempt to nullify a ruling by the Israeli High Court, allowing the Palestinians to use bypass road #443, Israel decided to illegally expropriate 321 Dunams of Palestinian lands, west of the central West Bank city of Ramallah.The military decision robs 321 Dunams (79.3 Acres) of privately owned Palestinian lands belonging to residents of Beit ‘Or al-Foqa village, Beit ‘Arik village and the town of Betunia.

Head of Beit ‘Or al-Foqa Village Council Rami ‘Alawi said Israel is alleging the decision was made due to “security considerations,” while in fact, ‘is nothing but theft of Palestinian orchards containing thousands of olive trees.’

‘Alawi stated the “decision is vague and ambiguous, and would lead to completing the chain of illegal colonies surrounding the village along with the military base in the area.”

He added the decision also prevents the villagers from using road #443, or even approach it, which turns it into another settler-only road.

The road has already led to the illegal annexation of thousands of Dunams of lands belonging to residents of various villages, west of Ramallah, as it also links with Jerusalem and historic Palestine.

Israel started denying the Palestinians access to the road since the beginning of the Al-Aqsa Intifada in late September 2000.

Besides the fact that Israel’s “settlements”, built in the occupied West Bank, in and around occupied East Jerusalem, are illegal under International Law and the Fourth Geneva Convention, they are largely built on private Palestinian lands.

Israel also claims it builds settlements on what it calls “State Lands,” those constructions, and Jewish-only communities are built on occupied lands; therefore, the “state” is an occupying power that took control over the lands by force, and cannot claim ownership of an occupied territory.

In addition, the International Humanitarian Law states that the occupation must be a temporary situation, while colonizing the land is a permanent move that involves moving civilian population of the occupying power to settle in occupied territories.

Article 49 of the Geneva Convention, August 12 1949, regarding the protection of civilians at the time of war, especially from deportations, evacuations and transfer forbids “the occupier from transferring its own populations into territories it occupies.”

“Individual or mass forcible transfers, as well as deportations of protected persons from occupied territory to the territory of the Occupying Power or to that of any other country, occupied or not, are prohibited, regardless of their motive.” https://www.icrc.org/applic/ihl/ihl.nsf/c525816bde96b7f…ument

Under Article 55 of The Hague Convention, the occupying power must safeguard the territories it occupied, and must maintain the status quo. https://www.icrc.org/applic/ihl/ihl.nsf/WebART/195-2000…ument

Land Expropriation and Settlements in the International Law – B’Tselem
http://www.btselem.org/settlements/international_law