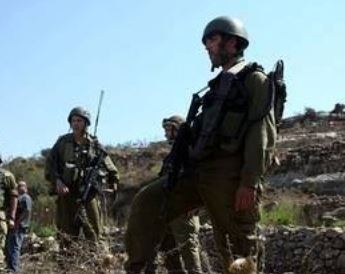 Several Israeli military jeeps invaded, on Wednesday at dawn, a number of communities in the southern West Bank district of Hebron, and the West Bank district of Bethlehem, and kidnapped nine Palestinians.The Palestinian News & Info Agency (WAFA) has reported that several military vehicles invaded Beit ‘Awwa town, west of Hebron, and kidnapped six Palestinians after breaking into their homes, and violently searched them.

Soldiers also invaded the home of ‘Ali Manasra, in Bani Neim town east of Hebron, and handed him a military warrant for interrogation.

In addition, soldiers installed roadblocks blocking main roads leading to Hebron City, the al-Fawwar refugee camp, and a number of nearby communities, stopped and searched dozens of cars and inspected the ID cards of the passengers.

Two Palestinians, identified as Abdullah Ahmad Saqr, 25, and Hussein Ahmad Abed-Rabbo, 26, have been kidnapped after the soldiers broke into their homes in ‘Aida refugee camp, north of Bethlehem.

In related news, a number of extremist Israeli settlers attacked Palestinian laborers at the eastern entrance of Marah Rabah village, south of Bethlehem.

Ahmad Sheikh, head of the Marah Rabah village council, said the settlers also chased the Palestinians in nearby olive orchards.

Sheikh added that the settlers recently escalated their assaults against the Palestinians in the area, especially while in their lands, or while trying to go to work, and while heading back home.

In the northern West Bank district of Jenin, soldiers installed a roadblock between al-Jalama and ‘Arrana villages, east of Jenin city, stopped and searched dozens of cars and interrogated the passengers while inspecting their ID cards.