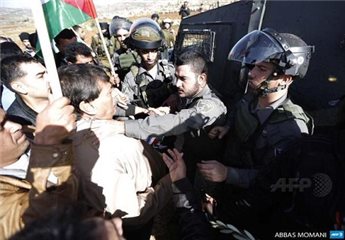 The head of the Palestinian Authority committee against the separation wall and settlements has died after being assaulted by Israeli soldiers in a village near Ramallah.55-year-old Ziad Abu Ein died after an Israeli soldier beat him on the chest with his helmet in the village of Turmsayya, director of the committee’s information center, Jamil al-Barghouthi, told Ma’an News Agency.

A Palestinian security source told AFP that Israeli forces beat Abu Ein with the butts of their rifles and their helmets during a protest march, upon which he lost consciousness and was taken to Ramallah Public Hospital, where he was later pronounced dead.

Medical sources said that Abu Ein lost consciousness and that his heart stopped after being beaten by Israeli soldiers and inhaling tear gas.

According to Ma’an correspondence, Abu Ein was taking part in a tree-planting project in an area of the village threatened with confiscation.

Dozens of other activists were also taking part in the project.

President Mahmoud Abbas said, Wednesday evening, that all options to respond to the killing of the minister are up for debate.

Abbas said that Israel would fabricate accounts in order to clear itself of the ‘murder of minister Abu Ein,’ adding: ‘We are determined to continue popular resistance’ until the occupation and settlements are removed.

Earlier Wednesday, the Palestinian leadership indicated that it had decided to end all security coordination with Israel in response to the death.