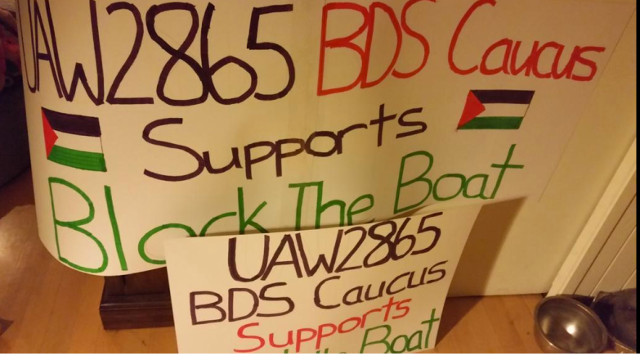 Historic: UAW 2865, UC student-worker union, becomes first major American labour union to support divestment from Israel by membership vote. In solidarity with Palestinian workers and students, voting members approve call for divestment by 65 percent; 52 percent pledged to support academic boycott.“This is a decisive victory for justice for Palestinians. After months of campaigning, we are inspired that so many members participated in this vote and made their voices heard. This is a testament to our membership’s engagement with matters of social justice. This vote was a first step in our commitment to solidarity with Palestinians under occupation and facing discriminatory laws, and we will continue to take steps to make that solidarity concrete as part of our involvement in anti-racist and anti-colonial struggles broadly.” –Kumars Salehi, member

“We are committed to linking student and labor movements in the United States to student and labor movements in other parts of the world, including Palestine. As student-workers fighting the attacks on education here in California as well as the decades-long crackdown on labor in the U.S. generally, we know that international labor solidarity makes us stronger and we support Palestinian students, workers and broader society in their decades-long struggle against dispossession, occupation and apartheid.” –Loubna Qutami, member

UAW 2865, a labor union representing over 13,000 teaching assistants, tutors, and other student-workers at the University of California, has become the first major U.S. labor union to hold a membership vote responding to the Palestinian civil society call for boycott, divestment and sanctions against Israeli occupation and in solidarity with Palestinian self-determination. The vote passed, with 65% (almost 2/3) of voting members in support. Over 2100 members voted, a testament to union democracy.

The measure calls on

1) the University of California to divest from companies involved in Israeli occupation and apartheid;

2) the UAW International to divest from these same entities;

3) the US government to end military aid to Israel.

4) 52 % of voting members also pledged not to “take part in any research, conferences, events, exchange programs, or other activities that are sponsored by Israeli universities complicit in the occupation of Palestine and the settler-colonial policies of the state of Israel” until such time as these universities take steps to end complicity with dispossession, occupation, and apartheid.

1136 members pledged to observe the academic boycott, a reflection of the ways student laborers are taking concrete actions to practice solidarity.