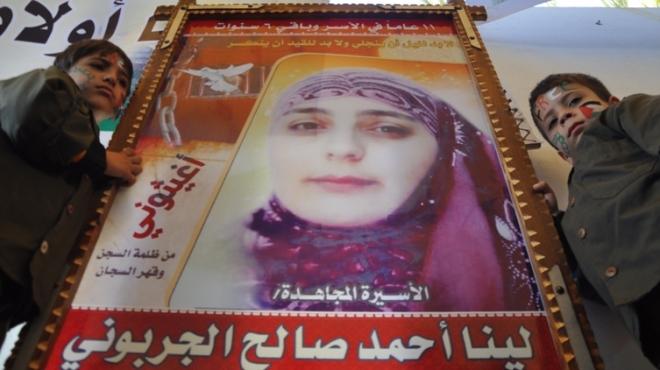 A report published by the Palestinian Detainees Committee on Sunday revealed that 17 Palestinian female detainees, held by Israel, are facing very harsh conditions, harassment and are denied the right to medical treatment.The Committee said Israel is currently holding captive 17 Palestinians women; the oldest is Lina al-Jarbouni, 40 years of age, from ‘Arraba al-Batouf in Akka, who has been imprisoned since more than 13 years, and the youngest is Dima Sawahra, 16 years of age, from occupied Jerusalem.

On Sunday, lawyer Heba Masalha of the Palestinian Detainees Committee, managed to visit four female detainees, held in the HaSharon Israeli prison, who informed her of constant harassment and violations, including soldiers repeatedly breaking into their rooms to search, and ransack them.

The detainees Masalha managed to visit are:

On November 10, head of the Census Department of the Palestinian Detainees’ Committee, Abdul-Nasser Ferwana, said Israeli soldiers have kidnapped more than 3000 Palestinians in five months, with a ratio of around 20 Palestinians each day.

Ferwana said 13000 (43%) of the kidnapped Palestinians are from occupied East Jerusalem, and that nearly 30% of them are children.

The former political prisoner also stated that all of the kidnapped Palestinians have been tortured during interrogation, and during their arrest, and that the torture was psychical and psychological, adding that they are held under very difficult, inhumane conditions, in direct violation of all related international agreements and conventions.

He said that there are currently more than 7000 Palestinians, including 280 children, held by Israel in various prisons, detention camps and interrogation centers, and that the number of Administrative Detainees, held without charges or trial is around 550.

In addition, the army kidnapped around 85 former political prisoners, who were previously released under the Shalit swap agreement, while four of them from the West Bank, were sent to Gaza as Israel refused to allow them back home.