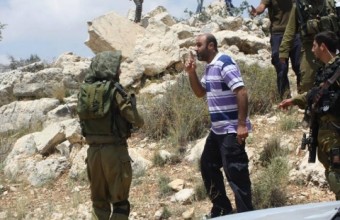 For the continued political goal of illegal settlement expansion in the occupied West Bank, Israel has zoned hundreds of dunams in the town of Kafr El-Deek, West Salfit, as an area of ‘natural reserve’.According to the PNN, Israeli authorities, Sunday, confiscated a bulldozer from a citizen working on expanding a road in the area. Mr. Rafat Zein Eddine, from Kafr El-Deek, said that occupation forces stopped him from expanding the earthen road, claiming that it was ‘natural reserve’ and prohibited any further action.

They confiscated his bulldozer without mentioning when it might be released.

Researcher Khaled Ma’ali explained that the area, called Banat Bar, is located to the south of Bido’il, Zahav and Leshim settlements. Thus, the Israeli occupation, through this activity, aims to expand these illegal settlements on account of Kafr El-Deek.

Mr. Ma’ali added that this is the second announcement, by Israel, of a nature reserve in Salfit, after Wadi Qana, which Israel has banned Palestinians from constructing or planting, in order to expand eight illegal settlements surrounding the village.

Israel so far has seized about 90% of Kafr El-Deek village, and continues to do so, unabated.