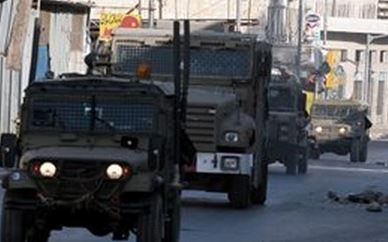 They added that soldiers forced Balasma out of a car, and inspected his ID card before kidnapping him to an unknown destination. Balasma is a former political prisoner who was repeatedly imprisoned by Israel.

In addition, soldiers hurled a number of gas bombs and concussion grenades into the Burin Secondary School for Boys, in Burin town south of Nablus, while the students were preparing to their classrooms.

The army alleged some students threw stones at them before entering their school.

In the Hebron district, in the southern part of the occupied West Bank, the army invaded homes and handed three young men from Yatta town, south of the city, military orders for interrogation at the Etzion military base.

Several military jeeps also invaded the towns of Yatta and Ethna, and installed roadblocks at the northern entrance of Hebron city, the main entrances of Sa’ir and Halhoul towns, stopped and searched dozens of cars and inspecting the ID cards of the passengers.