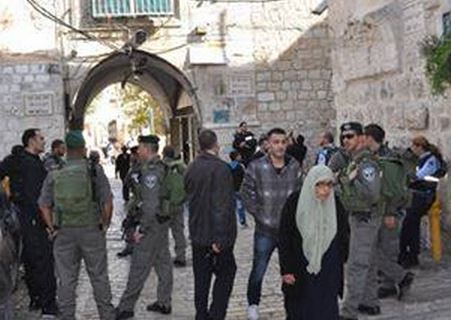 Clashes took place overnight in different parts of occupied Jerusalem, as protests continue following the death of Mahmoud ‘Adwan, who was shot and killed by the army in the Qalandia refugee camp, on Tuesday at dawn.The WAFA News Agency has reported that most of the clashes were focused in the al-Wad Street, extending from Bab al-‘Amoud area that leads to the gates of the Al-Aqsa Mosque.

On Wednesday at dawn, soldiers kidnapped three Palestinians in occupied Jerusalem, after breaking into their homes and searching them, causing property damage.

The kidnapped are Ismael Mohammad al-Masri, in Sur Baher town, southeast of East Jerusalem, Amjad at-Tawil from his home in the ath-Thoury neighborhood, and Ibrahim Osama al-Batta, 21, from Sweih neighborhood, both in Silwan town, south of the Al-Aqsa Mosque.

Meanwhile, dozens of extremist Israeli settlers invaded the yards of the Al-Aqsa Mosque, through the al-Magharba Gate, while dozens of police officers accompanied them and surrounded the area to prevent the Palestinians from reaching the mosque.

Eyewitnesses said the settlers invaded the mosque yards in several small groups, while the soldiers withheld the ID cards of dozens of Palestinian men and women before allowing them to enter the mosque.