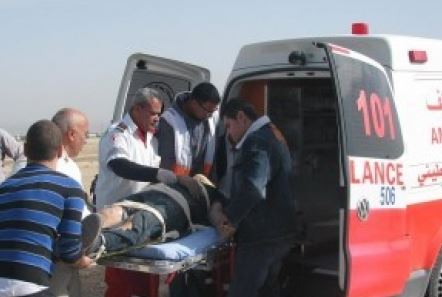 Palestinian medical sources have reported, Tuesday, that a woman was injured after being hit by a speeding Israeli settler’s car, east of the northern West Bank city of Qalqilia.The sources said the woman, Emtithal Abdullah Qashwa’, was struck while trying to cross the road, and that the settler fled the scene.

Qashwa’ is a teacher at the Nabi Elias Secondary School, east of Qalqilia.

She was moved to the Darwish Nazzal Hospital in Qalqilia, suffering several fractures and bruises. Her injuries have been described as moderate-but-stable.

There have been numerous similar incidents in different parts of the occupied West Bank, including in Jerusalem, causing dozens of injuries and several fatalities.

On Monday, November 24, a child suffered several fractures and bruises, after being struck by a speeding settler’s vehicle, west of occupied Jerusalem. http://www.imemc.org/article/69826

On Friday, November 21, a Palestinian woman was wounded after an Israeli settler deliberately rammed her with his car in Shu’fat town, north of occupied Jerusalem, and fled the scene. http://www.imemc.org/article/69801