US To Veto Palestinian Resolution 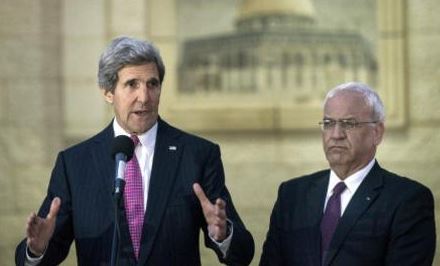 U.S. Secretary of State John Kerry said his country will veto the Palestinian resolution at the United Nations, aiming at ending the illegal Israeli occupation of Palestine within two years. Kerry declared his expected country’s stance following an extended meeting with Palestinian officials. A Palestinian official said Kerry informed Chief Negotiator Dr. Saeb Erekat that Washington will use its veto power to topple Jordanian-backed resolution that calls for ending the Israeli occupation and establishing an independent Palestinian with East Jerusalem as its capital.

The official said the meeting with Kerry was very difficult, and that the Palestinians told him that, should Washington veto their resolution; the leadership will file applications to join more international, United Nations institutions, including the Rome Convention regarding joining the International Criminal Court.

He added that the Palestinian leadership told Kerry it will be submitting the draft resolution, and that the US Administration is rejecting any reference to the future of occupied Jerusalem, opposes the two-year time-frame for ending the Israeli occupation, and wants the draft to include a recognition of Israel as a “Jewish State.”

Prior to his meeting with Erekat in London, Kerry said he held talks with various leaders during his three-day tour in Europe, and that the US believes that any move “should be carefully weighed.”

Kerry told Erekat that the White House opposes the drat, that was approved by the Arab League, while the State Department admitted there was talk regarding the US never using its veto power against Israel, Israeli Ynet News said.

The Ynet said Kerry told reporters in Paris that the status quo was unsustainable for Israel and the Palestinians, and that his country is trying to engage in what he dubbed as “constructive talks with all related parties.”

Settlements are illegal under International Law and the Fourth Geneva Convention, to which Israel is a signatory, while the Gaza Strip remains under deadly siege, and constant Israeli violations.

The United States provides Israel with more than 3 billion dollars a year in direct aid, in addition to hundreds of millions in military and security contributions, an issue that effectively makes the US the financier of this occupation and its illegal colonies in occupied Palestine.