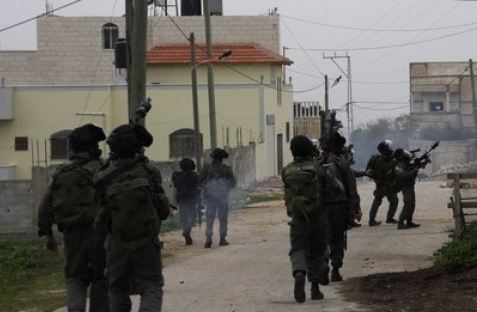 Palestinian medical sources have reported that several residents have been injured in the Safa and ath-Thaher areas, in Beit Ummar town, north of the southern West Bank city of Hebron, after a number of Israeli military vehicles invaded them.Spokesperson of the Popular Committee against the Wall and Settlements in Beit Ummar Mohammad Awad said clashes took place near the Karmie Tzur illegal settlements, built on Palestinian lands, and that the invading soldiers fired rubber-coated metal bullets, gas bombs and concussion grenades at the residents, and a number of homes.

Awad added that a young Palestinian man was shot in his arm, and another tripped and fell from a relatively high terrace wall while the soldiers were chasing him and several Palestinians.

Many residents also suffered the effects of tear gas inhalation.

In related news, soldiers invaded the Tabaqa village, south of Hebron, and fired several gas bombs and concussion grenades at a number of homes.

They also chased several local youths, and installed a roadblock in the village, before stopping and searching dozens of residents and cars.

The army also installed a roadblock at the main junction that links Doura city with several Palestinian villages through the western and southern parts.