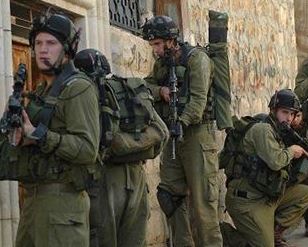 A number of Israeli military vehicles invaded, on Friday, an area in the al-Khader town, south of the West Bank city of Bethlehem, and ordered a Palestinian to stop digging a water well in his land, close to an illegal settlement.Ahmad Salah, coordinator of the Popular Committee against the Wall and Settlements in al-Khader, told the Palestinian News and Info Agency (WAFA) that the soldiers, accompanied by personnel of the “Civil Administration Office,’ invaded the Thahr al-Jorn area, close to Neve Daniel illegal settlement, and handed the order to Khader Ali Ghneim.

The army told Ghneim that the well he was digging “did not receive a permit from the Civil Administration Office,” run by the military in the occupied West Bank.

The well is part of a project run by the Palestinian Agricultural Relief aiming at helping the Palestinians, especially amidst the ongoing Israeli violations against them, and their lands, for the benefit of illegal settlements.

In related news, soldiers confiscated three Palestinian tractors, east of Yatta town in the southern West Bank district of Hebron, and prevented the Palestinians from plowing their lands to prepare for the winter season.

Rateb Jabour, coordinator of the Popular Committee against the Wall and Settlements, said the soldiers confiscated the tractors in Susiya area, and that the machines belong to members of the Nawaj’a family.

He called on local and international human rights groups and organizations to act on ending the ongoing Israeli violations against the Palestinians, and their lands.