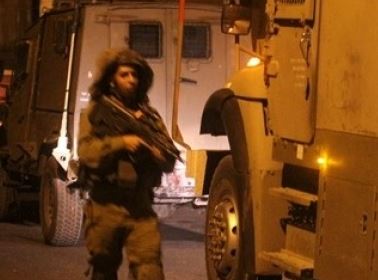 Israeli soldiers kidnapped, on Tuesday at dawn, five Palestinians in Hebron and Nablus districts, in the occupied West Bank, and four Palestinians kidnapped near Ramallah on Monday night, shortly after midnight.Many Palestinians suffered the effects of tear gas inhalation during clashes between the invading soldiers and local youths.

Medical sources in Hebron, in the southern part of the West Bank, said a number of Palestinians suffered the effects of tear gas inhalation, near the Abu ar-Reesh military roadblock, in Hebron’s Old City.

The sources said all wounded Palestinians received treatment by field medics, and did not require further medical attention.

In addition, soldiers kidnapped a student of the Palestine Polytechnic University, after invading his home, and ransacking it, in Hebron, and took him to an unknown destination.

Soldiers also installed several roadblocks at the entrances of Halhoul and Sa’ir towns, stopped and searched dozens of cars, and interrogated the residents while inspecting their ID cards.

The army also invaded the al-Fawwar refugee camp, south of the city, and kidnapped two Palestinians on a roadblock the soldiers installed near the main entrance of the camp.

The two have been identified as Mohammad Abdul-Mo’ty Ghatasha, 21, and Yaman Omar Khashan, 22.

The soldiers also invaded kafr Qalil village, south of Nablus, and several neighborhoods in Nablus city and nearby communities, searched and ransacked a number of homes.

The invasion was carried out by the soldiers after local Palestinians stopped an armed Israeli settler as he was trying to infiltrate into a neighborhood at the edge of the town. The soldiers fired gas bombs and concussion grenades at the residents.

In related news, a Palestinian security source said an unspent tank shell, apparently dropped by the army during training, was located between the villages of Jama’in and ‘Orif, south of Nablus, and that the shell was safely defused.

The army frequently conducts live fire training and military drills in and near Palestinian communities and towns, especially near Bedouin communities in the Jordan Valley, and close to villages and communities in the Hebron district, as well as many other areas in the occupied West Bank.

The four have been identified as Ibrahim Qassem, Mohammad Zobeidi, Qassam Msseitef, and Mousa Fawaqa.