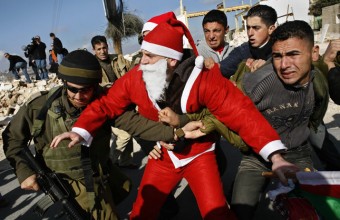 A number of journalists, on Tuesday, were injured after being targeted by Israeli forces with teargas and explosive acoustic devices, during a non-violent demonstration which took place near an Israeli checkpoint in North Bethlehem.PNN reports that several journalists, activists and citizens were rushed to the hospital following the dispersal of a peaceful Bethlehem march calling for ‘Christmas Without Occupation’.

The demonstration was launched at 12 PM, near the ‘300’ checkpoint which leads to Jerusalem.

Demonstrators marched to the checkpoint to celebrate Christmas and hand out gifts to children in the area, according to Ma’an News Agency.

Marchers held up signs reading: ‘Jesus came with a message of: Peace, Freedom and Justice’ and ‘We want Christmas without occupation.’

Israeli forces prevented demonstrators, some of whom were dressed as Santa Claus, from reaching the checkpoint and fired tear gas at the crowd.

Mazen al-Azza, an activist with the Palestinian National Initiative, told Ma’an that the march had a peaceful Christmas message, but ‘Israeli soldiers did not miss the chance to suppress it by assaulting journalists and peaceful demonstrators.’

The demonstration was completely non-violent and aimed to protest Israeli oppression and call for Palestinian rights during the most celebratory season of the year in the Holy Land of Palestine; Christmas.

Bethlehem is cut off from Jerusalem, historically its twin city, by an apartheid wall which runs along the northern side of the city.

Though mainstream media tends to avoid coverage of such incidents, Israeli attacks on Palestinians and their property in the occupied territories are by no means exclusive to Muslims, as acts of vandalism (including arson) on Christian holy sites are historic and well documented.