Army Demolishes A Barn In Jerusalem 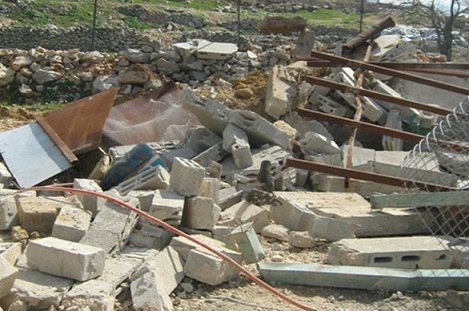 Israeli bulldozers demolished, Wednesday, a barn in the at-Tour village, in occupied East Jerusalem, and a wall surrounding a Palestinian land in Mount of Olives area.Local sources said several military vehicles and personnel of the Jerusalem City Council invaded the area, and demolished the sheep barn under the pretext of being installed without a permit.

The owner, Ramadan Shabana, told WAFA News Agency that this is the fourth time his barn gets demolished, adding that it is built in his own land, in Khallet al-Ein area.

In related news, soldiers demolished a wall surrounding a land belonging to members of the al-Ansari family, in occupied Jerusalem, in an attempt to illegally confiscate the land, for what the City Council dubbed as “public use.”

The family said it would be heading to court to challenge the illegal Israeli measure, especially since they officially own the property.

In related news, a number of Israeli extremists attacked, on Wednesday morning, a Palestinian construction worker from Hebron, causing various cuts and bruises.

Medical sources in Hebron said ‘Atiyya Harahsha, from Bani Neim town east of Hebron, has been moved to the Hebron Governmental Hospital for treatment.