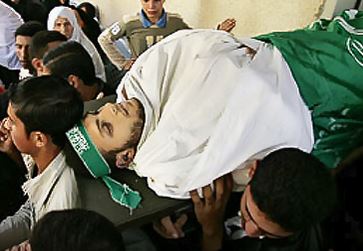 The al-Qassam Brigades, the armed wing of the Hamas movement, said one of its fighters was killed, and an Israeli soldier was injured, during clashes that took place after the soldiers fired shells close to the al-Qarara town, east of Khan Younis, in the southern part of the Gaza Strip.The Brigades said Taiseer Yousef Samri, was killed by an Israeli shell in the al-Qarara area, east of Khan Younis.

The army fired several shells into al-Qarara, and fired dozens of rounds of live ammunition targeting homes, and agricultural lands, in the area causing property damage.

The sources added that the army ordered Israeli farmers in the Eshkol Regional Council of settlements, to stop all works close to the border fence with the coastal region.

Initial reports indicate that a soldier was moved to the Soroka Israeli hospital, after suffering a moderate-to-sever injury during clashes with Palestinian fighters.

Israel Channel 10 said a military force came under fire while providing protection to workers mending a gap in the security fence, east of Khan Younis, and that the army ‘returned fire.’

The army also fired several tank shells, and aircraft fire, after the army allegedly came under sniper fire in the area.

The Hamas movement said the latest incident is a serious Israeli breech and violation of ceasefire terms.

On Sunday December 21, Israeli Defense Minister Moshe Ya’alon claimed that, an international “Jihadist organization fired, on Friday January 19, a shell from Gaza into the Eshkol Regional Council of Settlements.

Ya’alon said that, although Hamas is not affiliated with the group, it is fully responsible for any fire from the coastal region.

“We took the trouble of delivering the message to Hamas through Egypt,” Ya’alon said, “Therefore, the Air Force fired missiles into a cement factory producing material to be used in tunnels.”