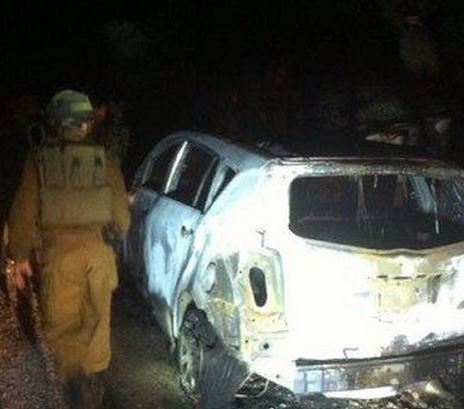 Israeli soldiers surrounded the town of Azzoun, east of the northern West Bank city of Qalqilia, and invaded it before kidnapping around 14 Palestinians. The army alleged a settler and his daughter were injured near the village.Israeli sources said a settler, and his 11-year-old daughter, were injured when a Molotov cocktail was hurled at their car, east of Qalqilia, adding that child suffered a serious injury due to facial burns, and burns to her torso.

The sources added that all kidnapped Palestinians have been moved to a number of interrogation centers, ‘to determine if they are involved in the attack.’

In related news, two Israeli “Border Guard” officers were injured after being stabbed near the Lions’ Gate, in occupied Jerusalem.

Earlier on Friday at dawn, Israeli soldiers kidnapped three Palestinian children in occupied Jerusalem, and took them to an interrogation center in the city.

Local sources said the soldiers invaded the home of Mousa Odah in the al-Bustan neighborhood in Silwan, south of the Al-Aqsa Mosque, and kidnapped his child, Musallam, 15 years of age. This is the eighteenth time the soldiers kidnap Musallam.

The soldiers also kidnapped two children in Ras al-’Amoud in Silwan; one of them has been identified as Mohammad Nasser, 12.