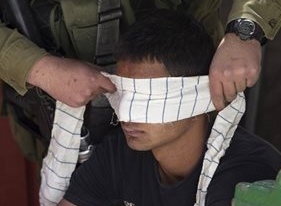 Undercover soldiers of the Israeli military kidnapped, on Friday evening, a young Palestinian man in Wadi al-Jouz neighborhood, during clashes that took place after the army invaded it. Army also kidnapped a child in Ras al-‘Amoud.Eyewitnesses said that the undercover forces assaulted the young Palestinian, causing various injuries, and moved him to an unknown destination.

They added that local youths burnt tires, and hurled stones, empty bottles and Molotov cocktails at Israeli military vehicles and police cars near the entrance of the neighborhood.

In related news, soldiers kidnapped a child, identified as Hamada Daoud Nasser, 13 years of age, in Ras al-‘Amoud neighborhood, and held him at an illegal settlement in the neighborhood.

On Thursday, the soldiers kidnapped Hamada’s brother, Mohammad, and released him on bail, after ordering him under house arrest for two days.

Earlier on Friday, soldiers kidnapped a child identified as Musallam Odah, and a young man, identified as Mohammad Sharwana, and held them at the al-Maskobiyya interrogation center for several hours before releasing them.