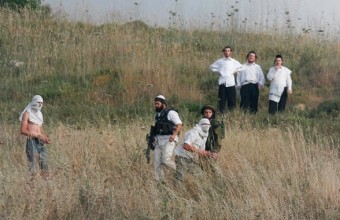 Extremist Jews from the Susia Settlement in Yatta, south of Hebron, sprayed chemicals on Palestinian lands, Saturday, causing damage to their crops.Member of the Popular Committee Against Settlements and the Apartheid Wall in Yatta, Rateb Jabour, said that a group of settlers sprayed chemicals on agricultural lands belonging to Mohammad Musa Mughannam’s family in Susia, causing damage to the planted areas of the land.

Mr. Jabour denounced the continuous assaults and hate crimes by settlers who receive complete protection from the Israeli police. He said that the assaults aim to force Palestinians to desert their homes and lands which will benefit Israeli settlement expansion.

Some 500,000 Israeli settlers now live in illegal developments across the occupied West Bank and East Jerusalem, in contravention of international law and with no direct opposition from powers who could intervene.

Jabour is imploring national, international, and human rights institutions to put an end to these violations.