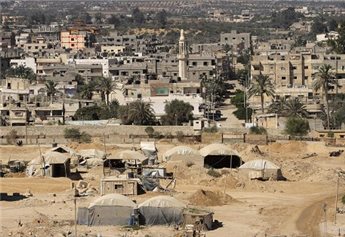 An Egyptian committee has finished surveying the homes of residents living between 500 and 1,000 meters of the Gaza border, in preparation for extending the buffer zone to a width of 1,000 meters, according to Egyptian military sources.The move comes following the previous destruction of hundreds of homes inside the 500-meter area, as part of a wider effort to ensure that the joint Israeli-Egyptian blockade of the Gaza Strip be fully carried out.

The engineering committee that carried out the survey is said to have examined around 1,200 homes in the area, in preparation for their demolition in this 13-kilometer long stretch of territory.

Work on the buffer zone on the Egyptian side began in February of 2014, according to Ma’an News Agency, but was slated to extend only about 300 meters in urban areas and 500 in rural areas.

After an October bombing attack killed more than 30 Egyptian soldiers in Sinai, however, the military stepped up the campaign, amid accusations of Hamas support for the group that carried out the attack, which Hamas has emphatically denied.

Both sides of the border are densely populated, Ma’an further reports, as the city of Rafah originally extended in both directions, a growth which was the result of the Israeli occupation of the Sinai Peninsula for more than a decade following the 1967 war.

In the early part of the past decade, Israeli authorities demolished thousands of homes in Rafah, in order to create a 300-meter buffer zone on the Egypt border, but, after the pull-out in 2005, a number of people moved back into the area.

The Egyptian government, which has been actively involved in destroying smuggling tunnels underneath the border, as well as directly targeting Hamas following a military coup in the summer of 2013, has now promised to uproot as many as possible to ensure the creation of a buffer zone on its side.

The border area was once host to hundreds of tunnels used by Gazans to import goods, in side-stepping the seven-year-old Israeli siege on the territory.