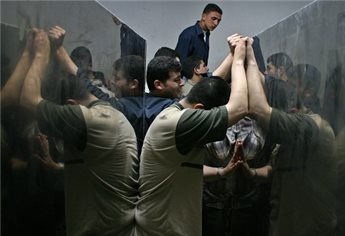 Palestinians around the world, this Saturday, commemorated the sixth anniversary of the beginning of Israel’s 22-day military offensive on the Gaza Strip, between 2008 and 2009 that left more than 1,400 people dead.This year’s commemorations take place in the shadow of another Israeli offensive over summer — the third major assault in six years — that left nearly 2,200 Palestinians dead and 110,000 homeless, Ma’an reports.

Until this year, the 2008-9 assault was the bloodiest Israeli assault inflicted on Palestinians since 1967, with more than 80 percent of victims believed to have been civilians.

Dubbed by Israel ‘Operation Cast Lead’, the assault began on Dececmber 27, 2008, at around 11:30 am, when Israeli warplanes launched over 100 airstrikes on Gaza simultaneously.

The attacks killed hundreds of police officers and civilians, including dozens of police cadets who were attending their graduation ceremony, and injured over 2,000 Gazans on the first day alone.

On January 3rd of 2009, an Israeli ground offensive began at around 9 pm, with Israeli soldiers, artillery, tanks and other units raiding the Gaza Strip by land, as the assault continued by air and sea.

Israeli forces used a number of internationally-banned weapons such as white phosphorus, a chemical which enters the body and burns the skin from the inside, and cannot be extinguished with common fire-fighting agents.

More than 5,500 Palestinians were injured in the assault, Ma’an further reports, while around 50,000 were displaced.