Yet Another Settler Hit and Run on Hebron Child 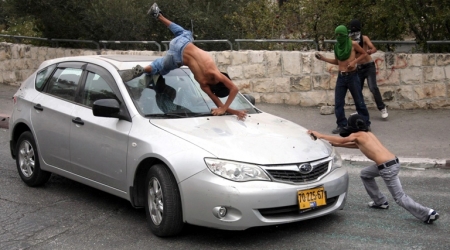 An Israeli settler, on Sunday, ran over 8-year-old Ali Qrei’esh, near Yatta town, South Hebron, then fled the scene with his car.According to the Palestinian News Network, local sources said that the settler ran over the child with his car, causing several injuries in his body. The boy was rushed to a hospital within the 1948 borders for treatment.

The incident is but one of several occurring amid ongoing tensions and ensuing confrontations in the West Bank.

In October, Einas Shawkat Khalil, age 5, from Sinjil village near Ramallah, was pronounced dead from her injuries, in Ramallah Public hospital, the day after an Israeli settler ran over her with his car.

In September, 6-year-old Islam Al-‘Amour, also from Yatta town, was hit by Israeli settler, causing a number of fractures, cuts and bruises in different areas of his body. Islam was immediately moved to Al-Ahli hospital in Hebron.

Israeli settlers regularly commit numerous crimes of this kind. However, the incidents are never actually investigated or punished by Israeli police, while retaliatory actions by Palestinians are widely publicized, inciting further tensions.

See 10/19/14 Palestinian Child Dies of Wounds Inflicted by Settler Car for further citings of such incidents.