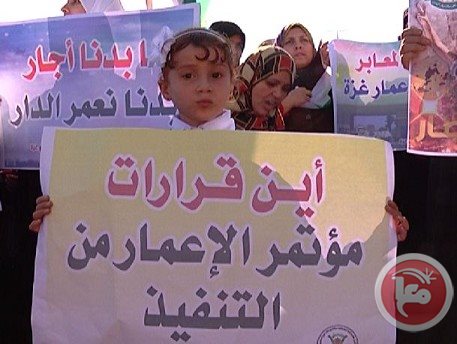 Three Palestinians were injured, Sunday afternoon, after Israeli forces opened fire on protesters near Erez crossing, on the border with Israel, in the northern Gaza Strip. Israeli border guards, stationed at Khan Younis, were also reported to have opened fire on Palestinian farmers.Witnesses told Ma’an News Agency that Israeli troops fired on dozens of young protestors who approached the border fence, after participating in a local rally in protest of the ongoing siege and in demand of Gaza’s reconstruction.

Three young men sustained gunshot injuries, as a result. One, who was hit in the thigh, was evacuated to a hospital in nearby Beit Hanoun.

An Israeli military spokesperson confirmed the incident, saying that ’40 or more Palestinians were hurling rocks and rioting violently’ and that Israeli forces ‘attempted to disperse the riot’ and ‘fired toward the main instigator’s lower extremities.’

Hundreds of Palestinians have been rallying across the Gaza Strip, demanding reconstruction of the war-torn coastal enclave and protesting the crippling Israeli siege on the region, which has been in place, now, for the past seven years.

The largest rally reportedly took place at the entrance of Gaza City’s Shuja’eyya neighborhood, which was utterly devastated by a summer-long Israeli military assault that destroyed tens of thousands of homes and left nearly 110,000 Palestinians homeless.

Over 2,000 Palestinians, including women, children and elderly — mostly civilians — were brutally murdered in the offensive.

Despite promises made by Israel, when the ceasefire was signed in August, the siege on Gaza continues, severely limiting the amount of reconstruction materials being allowed in.

Other rallies took place in Rafah, in the southern Gaza Strip, Bani Suheila and Nuseirat, in the central Gaza Strip, as well as near the Erez crossing close to Beit Hanoun, where Israeli soldiers also opened fire on marchers.

Ma’an further reports that the rallies come just a day after senior Hamas official Mousa Abu Marzouq slammed the national unity government for failing to have carried out its duties in Gaza.

He accused the government of refusing to take control and thus stymieing reconstruction, as donors lacked a governmental partner to work with.

Also on Sunday, in the Gaza Strip, Israeli border guards stationed at the Khan Younis eastern borders fired at Palestinian farmers who were farming their land, according to WAFA correspondence.

Israeli soldiers fired live ammunition at the farmers who were working their lands close to the buffer zone.

The Israeli military has issued orders prohibiting any Palestinian presence on the land within Gaza abutting the territory’s perimeter fence, currently up to 300 meters from the fence, but Israeli forces have frequently shot at Palestinians beyond that distance.

United Nations figures indicate that Israeli military forces have killed four and wounded more than 60 civilians near the perimeter fence with Gaza since the beginning of 2014.

According to the United Nations Office for the Coordination of Humanitarian Affairs (OCHA), the buffer zone takes up about 44% of Gaza’s territory.