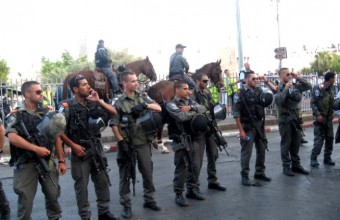 A number of Jewish extremists, broke into Al Aqsa Mosque compound in occupied East Jerusalem, Monday, continuing with a string of near daily provocations into the Islamic holy site, say local sources.Israeli police at the gates of the compound held the ID cards of Palestinian worshipers who were allowed into the mosque, a procedure which Israel takes when anticipating riots to be able to track those who were present at the time.

According to WAFA correspondence, there were no reports of clashes at the holy site, though such incidents tend to stir unrest within the compound, ultimately affecting the overall situation in Jerusalem.

The site is currently administered by the Jordanian Ministry of Awqaf, but Israel maintains security over it and imposes tight restrictions on entry, especially among younger Palestinians.

The plan was reportedly announced during a meeting specified for assessing the security situation in Jerusalem.