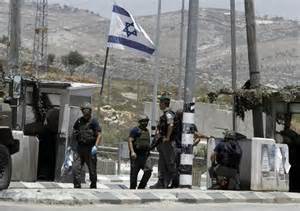 On Monday, Israeli army officials confirmed that their soldiers shot and killed a young Palestinian at the Zaatara (Tappuah) checkpoint near Nablus, in the northern part of the West Bank. The youth was identified as Imam Jamil Dweikat.Another Palestinian youth was wounded seriously by Israeli gunshots in the same incident. He was identified as Nael Thiab, 19. He was taken to the central hospital in Nablus with multiple gunshot wounds.

The body of the killed youth, Imam Dweikat, was taken by the Israeli army after they shot and killed him, and has not yet been returned to his family.

Israeli forces claimed that the youth had been throwing stones toward soldiers patrolling near the checkpoint, but local eyewitnesses challenged that account, saying that the youth were targeted without provocation.

The death of Dweikat marks the 50th Palestinian to be killed in the West Bank in 2014. The total number of Palestinians killed in 2014 by Israeli troops is 2,335, the vast majority of whom were killed during the Israeli invasion of Gaza in July and August.