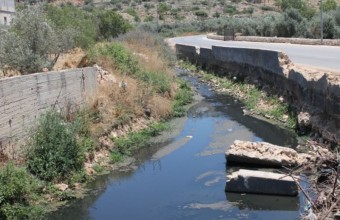 Soldiers also set up earth mounds in the area, as a prelude for military training exercises.

Israeli forces follow a systematic policy of targeting agricultural land that is considered to be the main livelihood of Palestinians, as an attempt to force residents to leave their land, for the benefit of settlement expansion.

The occupied West Bank is also a scene of frequent settler attacks against Palestinians and their property, including physical assaults on farmers, in addition to crop theft and/or destruction, which is often done under the protection of Israeli soldiers.

Farmers often complain of sewage water pumped from nearby settlements into their land, thus destroying their crops.

The PNN reports that eyewitnesses and Palestinian shepherds, Sunday, complained about factories in the industrial zone of ‘Burkhan’ Israeli settlement, near Salfit, in the northern West Bank, as settlers routinely dump their waste-water into the region’s valleys over the weekend.

Researcher Khaled Ma’ali said that the waste-water from Borkan factory is not poured gradually but, rather, all at once.

The four industrial zones pouring the ‘skunk water’ into the Salfit valleys are located in Ariel, Borkan, Amanoel and Zahav illegal settlements, according to eyewitnesses.

Ma’ali assured that the environmental pollution caused by the settlements’ industrial zones takes long years to recover, and will cause extensive environmental destruction.

He is calling on environment organizations to hold Israeli authorities accountable for the damage it is causing, and to compensate those affected.

Furthermore, on Sunday, Israeli soldiers violently raided a boys’ school in the town of al-Khader, to the south of Bethlehem, in search of two students.

Witnesses told WAFA that a number of soldiers raided the school yard and the principal’s office in a brutal manner, in search of the two students, spreading panic and fear among other students.

The teaching staff prevented the soldiers from coming near the students, however, and forced them out of the school.

Israeli forces often target schools and other educational facilities and tends to use excessive force against students and teaching staff, in further violation of international law.

“Fifty-eight education-related incidents affecting 11,935 children were reported in the West Bank in 2013, resulting in damage to school facilities, interruption of classes and injury to children,” according to the United Nations Special Representative for Children and Armed Conflict.

The organization reported that “forty-one incidents involved Israeli security forces operations near or inside schools, forced entry without forewarning, the firing of tear gas canisters and sound bombs into school yards and, in some cases, structural damage to schools.”

In related news, the principal of al-Hussein Ibn Ali school, in Hebron, as well as the school secretary and janitor have fallen ill after receiving a suspicious package on Sunday, a local official said.

Director of the Hebron branch of the Palestinian Ministry of Education Bassam Tahboub told Ma’an News Agency that the three employees began suffering from nausea and dizziness immediately after opening an envelope that had arrived from Italy.

‘When the school principal, Abd al-Muati Abu Sneina, opened it in the presence of secretary Fadi Shehada and janitor Nidal al-Qawasmi, they all started to sneeze in an unusual way and they had nausea and dizziness before they were evacuated to the public hospital of Hebron,’ he said.

Director of the area’s public hospital, Abdullah al-Qawasmi, said that the three would remain in the hospital for follow up, though he confirmed that the three are in stable condition.

They are suffering from agitation and continuous sneezing caused by a ‘gluey material wrapped in cellophane inside the envelope,’ he further stated.

The material has been sent to governmental laboratories to be tested, while Palestinian security services have launched an investigation into the incident.

The case is the third of its kind in Hebron in recent weeks.