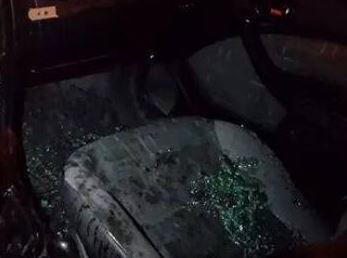 Medical sources reported, on Monday at night, that two Palestinians have been injured, one seriously, after Israeli soldiers opened fire on their car, driving in Beit Ummar town, north of the southern West Bank city of Hebron.Spokesperson of the Popular Committee against the Wall and Settlements in Beit Ummar, Mohammad Awad, said resident Ibrahim Sabri was shot in the head, and was moved to the al-Ahli hospital in Hebron suffering a serious injury.

Another Palestinian, identified as ‘Ayesh Awad, suffered a moderate injury to the forehead.

Following the shooting, the soldiers sealed the main entrance of the town, stopped and searched dozens of cars, and interrogated the residents while inspecting their ID cards.

On Monday evening, soldiers invaded the Ein al-Louza neighborhood, in Silwan town, south of the Al-Aqsa Mosque in occupied Jerusalem, and kidnapped one Palestinian.

Eyewitnesses said the soldiers kidnapped ‘Adli Abu Tayeh, and took him to an interrogation facility in Jerusalem.

Soldiers also broke into and violently searched several homes in the neighborhood, and in other parts of Silwan