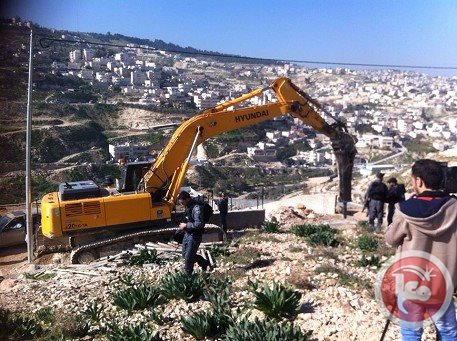 Israeli authorities, Tuesday, destroyed three homes, a restaurant and a butcher shop in the East Jerusalem village of Jabal al-Mukabbir, in a dawn raid which has left two Palestinian families homeless.According to Ma’an News Agency, the raid brings the total number of Palestinian properties destroyed by Israeli bulldozers in the occupied West Bank and East Jerusalem, so far this year, to 561, displacing over 1,165 people, according to figures collected by the United Nations.

Israeli police escorted inspectors from the Israeli municipality into the neighborhoods of al-Farouq and al-Salaa, in the village, where they demolished the homes without allowing residents to remove any belongings or furniture.

Displaced homeowner Khalid al-Halasa says that he and his six family members were not at home when the bulldozer arrived, and that his 100 square meter home,finished only three months ago, is now destroyed.

Imad Abu Mayyala told Ma’an that Israeli bulldozers demolished his 100 square meter house, as well. He and his seven family members had been living in since August.

Additionally, the bulldozers demolished a restaurant and a butcher shop made of steel bars and tin sheets.

The buildings, belonging to Mr. Aziz Jaabis, measured 70 square meters and had been built seven months ago. Jaabis told Ma’an that the total loss from the destruction amounted to some 150,000 shekels ($38,000).

Israeli authorities also demolished a 150-square-meter house under construction belonging to a local named Ali Ruweidi, as well as a wall surrounding a tract of land in the neighborhood, in addition to leveling the land itself. The owner of the plot was from the Bashir family.

One local, however, reportedly managed to avoid losing his structure to the bulldozers during the raid.

Muhammad Salama Shqeirat told Ma’an that he paid an Israeli court $40,000 shekels ($10,200) and got a court order to stop the demolition of his 90 square meter home, the construction of which was completed three months ago.

Only 14 percent of East Jerusalem land is zoned for Palestinian residential construction, while one-third of Palestinian land has been confiscated, since 1967, for the building of illegal ‘Jewish-only’ settlements, according to the Association for Civil Rights in Israel.

During the 1967 war, Israel captured East Jerusalem from Jordan, occupied it, and later annexed it, in a move never recognized by the international community.

The capture was further accompanied by massive demolitions in Jerusalem’s Old City district that saw the displacement of thousands of Palestinians, while home demolitions and other strategies to limit construction in Palestinian areas, since then, have forced thousands more to leave the city.

Although Palestinians in occupied East Jerusalem live within territory that Israel has unilaterally annexed, they lack citizenship rights and are, instead, classified only as ‘residents’ whose permits can be revoked, should they move away from the city for more than a few years.

More than 14,000 Palestinian residents of East Jerusalem have had their permits revoked since 1967, denying them the ability to ever return to their homes.