Gaza: Feiglin says Invade, Keep It, And ‘Destroy All Who Fight Back’ 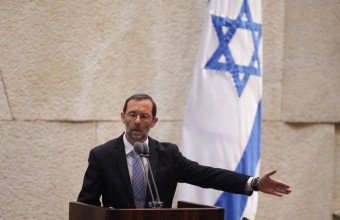 A recently released video of a speech made by Deputy Knesset Speaker Moshe Feiglin, in July of this year, shows Feiglin calling for an Israeli sponsored bloodbath in Gaza, according to the PNN.Addicting Info’s Randa Morris reports that, during the speech, Feiglin said that there are no innocent people in Gaza:

‘We have a war over here, and the war is not against the Hamas and there’s no innocent people around it.’

The leader was met with applause by an audience of eager listeners, even as he claimed that refraining from attacking civilians and children is ‘immoral’ and a violation of Jewish law which puts Israeli soldiers in danger:

Feiglin’s speech was apparently nothing less than a veiled call for genocide:

‘We’re not defending ourselves, we’re fighting for justice. It’s ours. This is the first thing we should understand. And we should take it over, capture the whole Gaza Strip – as we did in 1967 and I’m talking about the right goal, the right goal should be victory, nothing less than that. Victory means destroying your enemy, and take over the place.’

Feiglin has insisted that his comments have been taken out of context in a smear campaign against him by left-wing journalists.

He has since been banned from entering the United Kingdom.