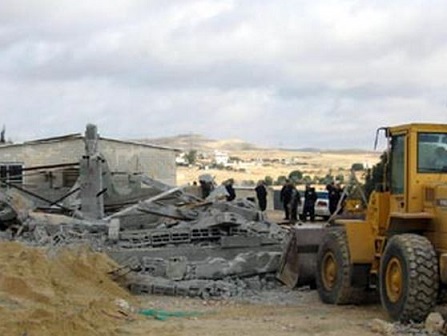 Israeli soldiers demolished, Tuesday, five homes in a number of villages in what Israel calls “unrecognized villages” in the Negev, although these communities have existed way before Israel was established in the historic land of Palestine.The Maan News agency has reported that the homes have been demolished in Tal as-Sabe’ village, Um Btein, ‘Ararat an-Naqab and Kaseefa, after the soldiers stormed them, and forcibly removed the families.

The residents never received demolition orders from the army; several families, with children and elderly, have been rendered homeless.

Official statistics revealed that Israel demolished more than 1100 homes in the Negev in 2014.

The destruction of the village comes part of what Israel dubs as “The Negev Development Plan,’ which aims to build Jewish settlements and shopping centers after removing and relocating the Bedouins from their villages, unrecognized by Tel Aviv, although they have been there before Israel was established in the historic land of Palestine in 1948.

On Monday morning, November 17, several Israeli military and police vehicles, accompanied by bulldozers, invaded the Bedouin village of al-‘Araqib, in the Negev, and demolished it for the 78th time. http://www.imemc.org/article/69737

Protests in the Negev, the West Bank, and Gaza against the Begin-Prawer plan
http://www.imemc.org/article/65820