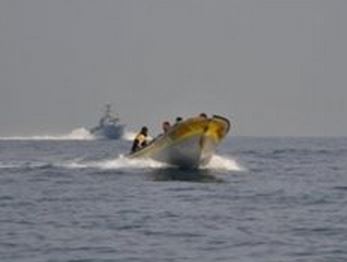 Israeli Navy boats opened fire, on Saturday at dawn, on a number of Palestinian fishing boats, in Gaza waters in Rafah, in the southern part of the Gaza Strip, seriously wounding one fisherman.Local sources said the navy fired dozens of rounds of live ammunition, and a shell, seriously wounding Jamal No’man, from the Shaty’ refugee camp, west of Gaza city.

No’man was moved to the Abu Yousef an-Najjar Hospital, in Rafah.

In addition, several armored Israeli military vehicles invaded Palestinian farmlands, north of Beit Lahia, in the northern part of the Gaza Strip, and bulldozed them while firing at nearby homes.

On Friday evening, a young Palestinian man was shot and injured by Israeli army fire northeast of Beit Lahia, and was moved to a local hospital suffering a moderate injury.