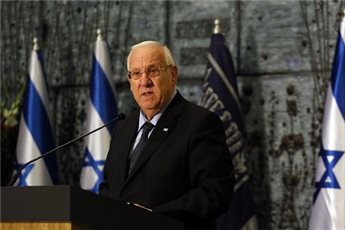 Israeli President Reuven Rivlin said, Monday, that he opposed a freeze in the transfer of taxes to the Palestinians in response to their application to join the International Criminal Court.’Freezing taxes can be useful neither for Israel nor for the Palestinians,’ Rivlin told ambassadors accredited to Israel in a speech.

In his speech, a copy of which was reviewed by AFP, Rivlin said that President Mahmoud Abbas ‘continues to reject direct negotiations and tries to impose a deal by force’, adding that such an approach ‘warrants sanctions.’

Israel on Saturday delayed the transfer of $127 million it collects on behalf of the Palestinians in retaliation for the Palestinian move to join the ICC and press war crimes charges.

‘Sanctions against the PA should be in line with Israeli interests, and a tax freeze is not,’ Rivlin said.

Monday’s statements are not the first criticisms against the Israeli state to come from Rivilin.

This past October, at a conference entitled “From Xenophobia to Accepting the Other”, the Israeli president was quoted to say: “It is time to honestly admit that Israeli society is ill – and it is our duty to treat this disease.”

“The tension between Jews and Arabs within the State of Israel has risen to record heights, and the relationship between all parties has reached a new low,” he said.

“We have all witnessed the shocking sequence of incidents and violence taking place by both sides. The epidemic of violence is not limited to one sector or another, it permeates every area and doesn’t skip any arena. There is violence in soccer stadiums as well as in the academia. There is violence in the social media and in everyday discourse, in hospitals and in schools.”

News of the president’s concern failed to make international headlines, however.

The Palestinian ICC bid is firmly opposed by Israel and the United States, and follows a failed draft UN Security Council resolution calling for a final peace deal.

Israeli officials suggested, Sunday, that the tax freeze was only the first of a series of punitive measures it could take against the Palestinian government.