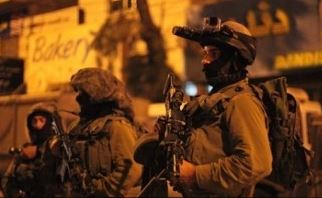 Israeli soldiers invaded, on Tuesday at dawn, several Palestinian communities in different parts of the occupied West Bank, broke into and searched dozens of homes, and kidnapped 21 Palestinians, including six in Beit Ummar town, north of the southern West Bank city of Hebron, and two in Jerusalem. One Palestinian Kidnapped On Tuesday At Night.Spokesperson of the Popular Committee against the Wall and Settlements in Beit Ummar, Mohammad Ayyad Awad, said the soldiers invaded the town, shot and injured resident Anwar Mohammad Za’aqeeq, 19, in his left leg as he was walking into his home after work. He was moved to a local hospital suffering a moderate injury.

Awad added that the soldiers also kidnapped six Palestinians in the town, and clashed with local youths who hurled stones and empty bottles at them.

Eyewitnesses said the soldiers forced the families of the kidnapped residents in the cold for several hours, while searching and ransacking their homes.

In addition, several soldiers invaded a bakery in the center of the town, and forced the workers out before questioning them while investigating their ID cards.

A young man, identified as Tal’at Jaradat, was also kidnapped from his home in Sielet al-Harethiyya nearby town.

One resident was kidnapped in Kharbatha, west of the central West Bank city of Ramallah, and one in ‘Ein ‘Arik, west of the city.

One Palestinian, identified as Montaser az-Zaghal, was kidnapped from his home in the Tulkarem refugee camp, in the northern West Bank city of Tulkarem.

In occupied Jerusalem, soldiers kidnapped two brothers, identified as Mohammad and Ahmad Tawil, after invading their home, and ransacking it.

Late on Monday at night, soldiers kidnapped a Palestinian, identified as Abdul-Rahim Taher al-Ashqar, 20, after alleging he attempted to stab a soldier.

The Qalqilia office of the Palestinian Prisoner Society (PPS) said al-Ashqar suffers from a mental illness, and that the soldiers moved him to Qadumim interrogation facility.