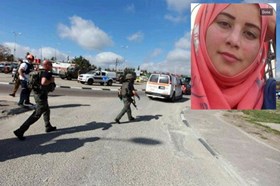 The Israeli Prison Authority transferred, on Tuesday, wounded female detainee, Amal Taqatqa, from an Israeli hospital to prion, despite her need for further medical attention, and treatment.The Palestinian Detainees Committee stated that Taqatqa, 22 years of age, was moved from the surgery ward of the Hadassah Ein Karem Israeli hospital, in Jerusalem, to the women’s section of the HaSharon Israeli prison.

The Committee said Taqatqa has not recovered from her injuries, cannot perform simple tasks, and requires constant medical treatment and observation.

Taqatqa underwent several surgeries, and currently cannot move around without a wheelchair, and is still facing sharp pain in her loin, left leg and arm.

On December 1st, Taqatqa was shot by several rounds of live ammunition, fired by Israeli soldiers at the Etzion Junction, south of the West Bank city of Bethlehem, after the army alleged she stabbed an Israeli settler, causing a minor cut to his neck. http://www.imemc.org/article/69881