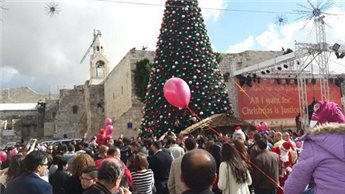 In Bethlehem Tuesday evening, patriarchs of the Eastern Orthodox church gathered at the Church of the Nativity, where Christians believe that Jesus was born, and thousands of pilgrims flocked to Manger Square to commemorate the occasion.

The festivities began with parades by scout troop bands, which marched in Bethlehem followed by worshipers and pilgrims.

The Israeli authorities increased their patrols in the Bethlehem area, and tightened the access through the checkpoint they maintain between Bethlehem and Jerusalem.

Gazan Christians were, for the most part, denied permits to go to Bethlehem to celebrate Christmas.