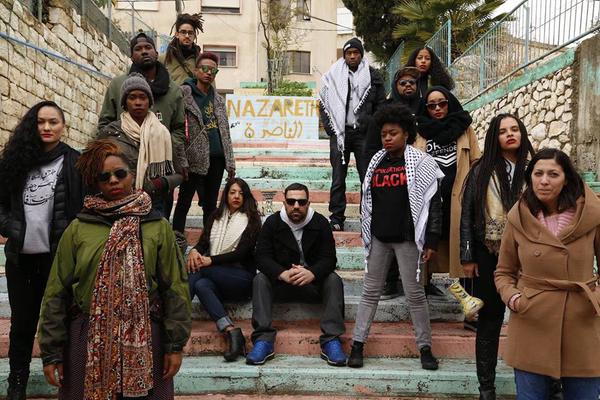 A delegation of young African American leaders from Ferguson and other US cities organized by ‘Dream Defenders’ are traveling through the Occupied Palestinian Territories this week to see first-hand the reality of life under military occupation.According to one of the delegation organizers, Ahmad Abuznaid, “The goals were primarily to allow for the group members to experience and see first hand the occupation, ethnic cleansing and brutality Israel has levied against Palestinians, but also to build real relationships with those on the ground leading the fight for liberation. In the spirit of Malcolm X, Angela Davis, Stokely Carmichael and many others, we thought the connections between the African American leadership of the movement in the US and those on the ground in Palestine needed to be reestablished and fortified.”

Abuznaid added, “As a Palestinian who has learned a great deal about struggle, movement, militancy and liberation from African Americans in the US, I dreamt of the day where I could bring that power back to my people in Palestine. This trip is a part of that process.”

Soon after the delegation arrived in Palestine, one of the members of the delegation tweeted, “Our brother, Legal & Policy Director, and the organizer of this trip, Ahmad Abuznaid is only allowed in Jerusalem, the place of his birth, on a work permit now. Due to the fact he is Palestinian, he can only get into Jerusalem by walking through a Checkpoint. Today, we joined him on his journey through gates that reminded us of cattle pens. #WeCantBreathe.”

Some of the organizations represented in the delegation include Black Lives Matter and the Black Youth Project 100 (BYP100). Patrisse Cullors, a co-founder of Black Lives Matter, told reporters from Ebony magazine that her first impression of occupied Palestine was that, “This is an apartheid state. We can’t deny that and if we do deny it we are apart of the Zionist violence. There are two different systems here in occupied Palestine. Two completely different systems. Folks are unable to go to parts of their own country. Folks are barred from their own country.”

Cherell Brown, another participant in the delegation, noted that “So many parallels exist between how the US polices, incarcerates, and perpetuates violence on the black community and how the Zionist state that exists in Israel perpetuates the same on Palestinians. This is not to say there aren’t vast differences and nuances that need to always be named, but our oppressors are literally collaborating together, learning from one another – and as oppressed people we have to do the same.’

The delegation has traveled to refugee camps in Bethlehem, as well as visiting Jerusalem, Ramallah, Haifa and Nazareth and meeting with various organizations.

Hip-hop artist Tef Poe wrote upon the conclusion of the delegation, ‘When I get home I get off the plane and go back to the north side of St. Louis a place where most of us are in just as much bondage as these people but the difference is we don’t know it or acknowledge it ….Power concedes to righteousness eventually.’