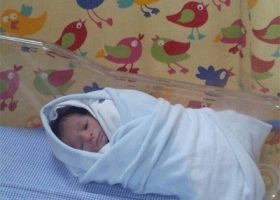 Another Palestinian infant died from the cold on Saturday, as well as a fisherman on the Gaza coast. This brings the death toll up to four in the last two days — three of the dead have been infants under one year old.The winter storm has severely impacted the people of Gaza, many of whom are still living in temporary shelters since they have been unable to rebuild after the Israeli assault in July and August of 2014 that left over 2100 people dead and tens of thousands homeless.

The latest casualty in the bitter cold of the winter storm has been identified as Salma Zeidan al-Masri, two months old.

She was staying with her family in a temporary shelter in Beit Hanoun, in the northern part of the Gaza Strip, since their home was destroyed in the Israeli assault this past summer.

One of the baby’s relatives said that she turned blue from the cold, since there was no heating available in the temporary shelter.

In addition, Ahmad Sufian al-Lahham, 22, was found dead on the Gaza shore near Khan Younis in southern Gaza. He was apparently attempting to secure fishing equipment on his family’s boat when he collapsed from the cold, and was later found dead.

The 1.4 million Palestinians living in Gaza have been suffering tremendously from the winter storm over the last several days, including flooding in many parts of the Strip and freezing temperatures.

As a result, and due to the ongoing Israeli blockade of Gaza, most Palestinians whose homes were destroyed by Israeli bombs in the summer have been unable to import the necessary materials to be able to rebuild their homes. The main Gaza power stations also suffered extreme damage, and have been unable to return to even half their capacity in the months since the Israeli invasion.