Another Infant Dies In Khan Younis As Cold Weather Continues 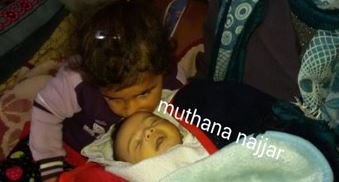 Palestinian medical sources have reported that an Infant died, Saturday, due to extreme cold in the war-torn, besieged and impoverished Gaza Strip. The infant’s death is the second in two days.The Ministry Of Health said the infant, ‘Adel Maher al-Lahham, only one month of age, died due to extreme cold, and snow, ravaging through occupied Palestine.

The infant is from Khan Younis, in the southern part of the Gaza Strip; he lived in his home along with his father, mother and three sisters, local sources said.

On Friday, an infant, identified as Rahaf Abu ‘Aasi, four months of age, died due to extreme cold, in the az-Zanna area, in Khan Younis. http://www.imemc.org/article/70219

Approximately 17.000 Palestinians are still living in 18 UNRWA schools in different parts of the Gaza Strip after the Israeli army bombarded their homes.

The Ministry of Housing in Gaza said the number of homes that have been destroyed, and partially damaged, during the Israeli aggression on the coastal region is close to 124,000.