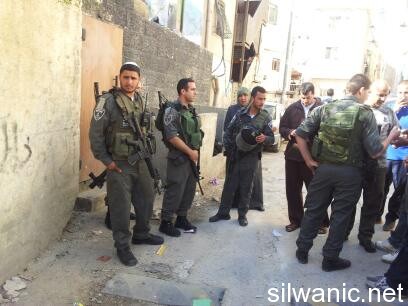 Israeli soldiers invaded, on Saturday evening, the town of Silwan, in occupied Jerusalem, and kidnapped eight Palestinians. Soldiers also detained and interrogated several residents.The Wadi Hilweh Information Center in Silwan said the soldiers invaded the neighborhood after a car, belonging to an Israeli settler, living in one of the illegal colonial outposts in the Central Neighborhood on the town, caught fire.

The Center said the soldiers were heavily deployed in the area, and installed a roadblock at the entrance of the al-‘Ein Street, before searching dozens of Palestinian cars, and inspected the ID cards of local youths while interrogating them.

They also invaded a home belonging to resident Abed Zeitoun, and violently pushed his wife while searching the property.

The soldiers also invaded the home of Nidal Zeitoun, before questioning the residents while inspecting their ID cards, and took pictures of the interior and exterior of the invaded homes.