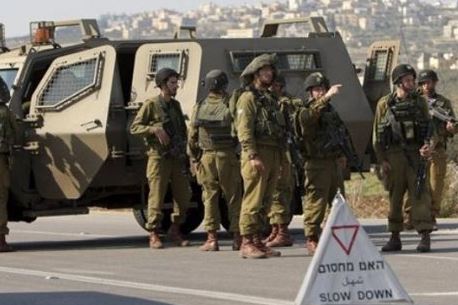 A number of armored Israeli military vehicles invaded, on Sunday at dawn, Hindaza area and the ‘Aida Refugee Camp, in the West Bank district of Bethlehem, broke into and searched several homes, and handed for Palestinians military warrants for interrogation.Local sources said the soldiers invaded the homes of Mohammad Nidal Abu ‘Aker, 21, Hazem Mustafa Abu ‘Aker, 21, and his brother Majdi, 17, in ‘Aida refugee camp, and Ismael Daoud Nabaheen, 23, in Hindaza area.

The army violently searched the invaded homes, interrogated the families, and handed the interrogation orders to the four Palestinians.

Soldiers also invaded the home of Ayman Abu Khadija, in ‘Aida refugee camp, and searched it.

In addition, the soldiers invaded kafreet village, southwest of the northern West Bank city of Jenin, and broke into several stores before detaining the ID cards of a number of local youths.

Eyewitnesses said six Israeli military vehicles invaded the village after the army surrounded it, and conducted a search campaign of various homes, before detaining and interrogating local youths.

Head of the Aseera Local Council Nasser Jawabra said the soldiers sealed all four entrances of the village, starting on five at dawn, prevented all residents from leaving it, an only allowed the inhabitants to enter it.