January 12 2015, A Historic Day For The Palestine National Football Team, And, Indeed, Palelestine 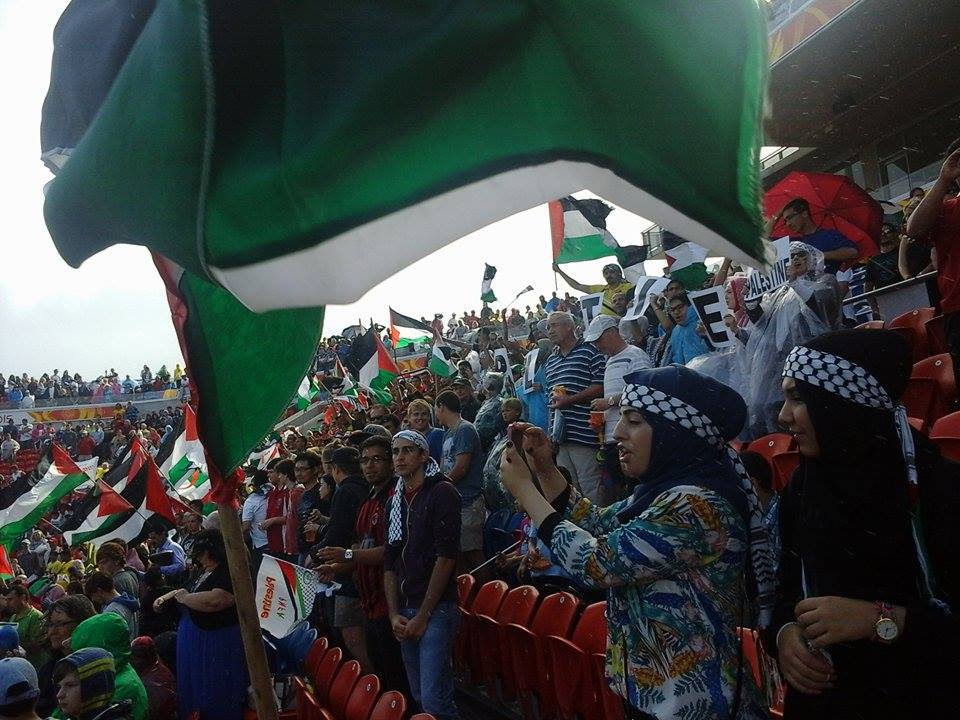 At 6:00pm at the Hunter stadium in Newcastle, Australia, Ramzi Saleh led the Palestinian team out for their first ever game in a major tournament.

To understand the importance of the event, one needs to be aware of what it took the team to get there.

Palestine qualified by virtue of winning the AFC Challenge Cup, overcoming The Philippines in the final to claim the 16th and final spot in the Asian Cup. But often, the challenges on the field are the least of the team’s problems.

The team does not even have a national stadium which they can use. The stadium in Gaza was bombed and destroyed in 2006 and again in 2012 during the Israeli army’s attacks.

Players from Gaza and the West Bank are routinely denied visas to play overseas as the Israeli government classifies all young males in Gaza as a ‘threat to national security’.

Players from Gaza are refused travel permits to even travel to train in other parts of their own country.

The refusal of Israel to issue exit visas to players forced Palestine to abandon their qualification attempts for both the 2007 Asian Cup and the 2010 World Cup.

The players themselves have suffered personally. Three players were targeted and killed by Israeli forces in 2008 and many other players have had their houses destroyed and been arrested and imprisoned without charge.

Mahmoud Sarsak suffered this fate in 2009 and went on hunger strike until pressure from FIFA forced his release. Future Palestinian footballers also risk their lives every time they pick up a ball.

In 2014, two teenagers returning from training in Al-Ram in the West Bank were stopped at an Israeli checkpoint and shot. Jahwar Nasser was shot 10 times in the feet, while Adam al-Raouf was shot once in each foot, ensuring neither would play again.

During the 2014 Israeli assault on Gaza, an Israeli warship targeted a group of young boys playing football on a beach in Gaza. After the shelling stopped, four brothers; Ismael Bakr, Zakaria Bakr, Ahed Bakr and Mohammed Bakr, aged from 9-12 had been killed.

So when The Palestine Football Team takes to the field the phrase ‘more than a game’ is never truer.

It is an event which gives weight to Palestine’s claim to statehood and is also a chance to highlight the Palestinian issue to the world.

The Hunter Stadium hosted 15,000 supporters on Monday night. A huge contingent had turned up to cheer on Palestine.

Not only those from the Palestinian diaspora, but people from all over Australia and people who had travelled from overseas to watch the game and show their support.

Palestine were up against a well-organised Japanese team who started as tournament favourites and are the reigning Asian Cup champions. Palestine soon found themselves behind to a 25 yard Yasuhito Endo strike.

In the 25th minute Keisuke Honda doubled Japan’s lead and just before half time Shinji Okazaki slotted home a penalty to make it 3-0.

Palestine fared somewhat better in the second half, although Ahmed Mahajna was sent off with 15 minutes to go for a second bookable offense. Maya Yoshida completed the scoring to make it 4-0 to Japan.

It was a hard lesson for Palestine, but one they can use when they take on Jordan in their second match on Friday.
Palestine know they have an uphill battle to fight, both on and off the field. It’s an achievement to be here, but they are not just here to make up the numbers.

While they are playing their part in Palestine’s bid for recognition and statehood, they are also here as professionals to play football. They lost this one, but they are not out yet.