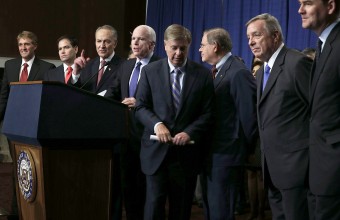 American senators have threatened Palestinian leadership with a ‘strong response’ over the recent decision to join the International Criminal Court.Press TV reports, via PNN, that Senators Lindsey Graham, Robert Menendez, Chuck Schumer, and Mark Kirk issued the warning in a statement, on Friday.

The statement described the Palestinian move as ‘deplorable’ and ‘counterproductive.’

PA President Mahmoud Abbas signed an application to join the Hague-based ICC after the United Nations Security Council rejected a Palestinian proposal for statehood on December 30, 2014.

‘Existing US law makes clear that if the Palestinians initiate an ICC judicially authorized investigation, or actively support such an investigation, all economic assistance to the PA must end,’ the senators said, adding:

‘In light of this legal requirement, Congress will reassess its support for assistance to the PA and seek additional ways to make clear to President Abbas that we strongly oppose his efforts to seek membership in the ICC.’

Related: Israel To Ask US Congress To Cut Aid To Palestinians

Earlier this week, the US State Department issued a similar warning.

State Department spokeswoman Jen Psaki said that the Palestinian Authority does not qualify for legal membership to the international court because Palestine is not yet a sovereign state.

However, UN Secretary General Ban Ki-moon recently stated: ‘The statute will enter into force for the State of Palestine on April 1, 2015.’