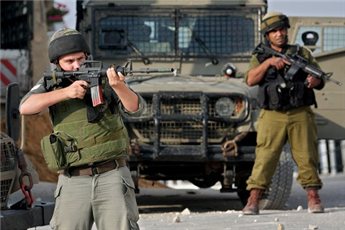 Medical sources in Hebron, in the southern part of the occupied West Bank, have reported on Tuesday evening that several Palestinians suffered the effects of tear gas inhalation, and one was shot by a rubber-coated metal bullet, during an Israeli military invasion into Beit Ummar town, north of the city.The sources said that all wounded Palestinians received treatment by local medics, and did not require hospitalization.

Media spokesperson of the Popular Committee against the Wall and Settlements in Beit Ummar, Mohammad Awad, said clashes took place in the ath-Thaher area, south of the town.

He said the soldiers fired rubber-coated metal bullets and gas bombs at local youths during the clashes, and at a number of homes.

In addition, several military jeeps invaded the al-Jabal area in the al-Fawwar refugee camp, south of Hebron, and fired concussion grenades at a number of homes; many children suffered anxiety attacks.