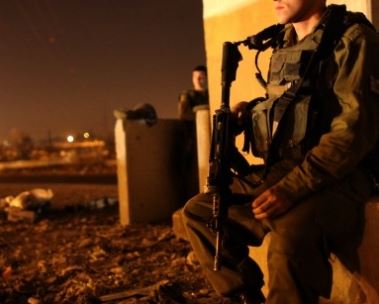 Israeli soldiers shot and killed, on Wednesday evening, a Palestinian teenager from Yatta town, near the southern West Bank city of Hebron, and kidnapped his friend, while walking near the Etzion Junction, south of Bethlehem.Medical sources said the soldiers shot Osama ‘Ali Mohammad Abu Jundiyya, 17 years of age, seriously wounding him, and prevented a Palestinian ambulance that rushed to the scene from reaching him, before he died of his wounds.

The soldiers also kidnapped Jundiyya’s friend, Mousa Jibrin an-Najjar, 20 years of age, and took him to the Etzion military base.

The Israeli Police alleged the slain Palestinian, and his friend, attempted to attack a car of an Israeli settler at the junction, and that one of the soldiers opened fire at them.

Police spokesperson Micky Rosenfed told the Maan News Agency that the two were part of what he called “a criminal incident”, and that the Police opened fire on them after they “attempted to escape.”