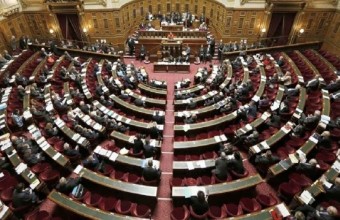 According to Palestinian Ambassador to Italy, Mai Al-Kaila, the Italian Parliament recently held a preliminary meeting to discuss recognizing a Palestinian State on the borders of 1967.Kaila said, in a statement to the PNN, that she attended the parliamentary hearing session held to discuss the Palestinian recognition proposal submitted by three minority parties on Friday afternoon.

Kaila said that it was obvious that the Italian right had adopted Netanyahu’s speech in Paris, as they focused on terrorism and its relations to Islamic political parties like Hamas. They also condemned the President Abbas for making an alliance with Hamas in forming the unity government.

Alternately, three leftist parties proposed resolution drafts to recognize a Palestinian state, leading to a heated discussion of differing opinions between members of the Parliament, and ultimately leaving the session to an open end.

Ambassador Kaila said that the Parliament will hold another session on January 21 to hear the presentations of Political Committee of the Palestinian Legislative Council Chair Abdallah Abdallah, who was invited by the Parliament, Palestinian Ambassador to Italy Mai Al-Kaila, along with Alon Liel, who wrote a document at the end of 2014 on behalf of Israeli intellectuals urging the British government to recognize Palestine, and Aster Mardoc, a professor at Tel Aviv University who also signed Liel’s document.

Palestine currently holds status as an ‘observer state’ within the United Nations, while a number of European countries and governing bodies have recently moved for official recognition, including Sweden and France.