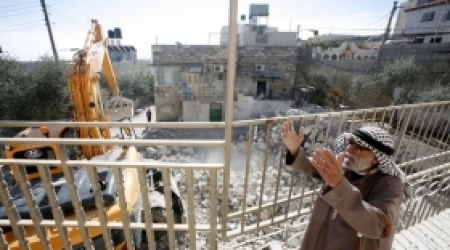 Hamoked Center for the Defence of the Individual has demanded that the Israeli High Court of Justice (HCJ) hold a hearing session to consider public petitions against the demolition of Palestinian houses in occupied Jerusalem.Al Ray Palestinian News Agency reports that, according to Hamoked, the HCJ rejected petitions filed last month, by the center and other human rights organizations, against the ongoing demolitions. The court ignored arguments put forth by Hamoked, including the legitimacy of using Section 119 of the Emergency Defense Regulations (1945) and a number of other findings dating back to the seventies and eighties.

The center further explained that demolition policies constitute a collective punishment which violates the fundamental principle that an individual may not be punished for the acts of someone else.

Section 119 also violates the rules of international law applying to territory under belligerent occupation, which prohibit the destruction of private or public property, except where rendered absolutely necessary by military operations. However, the demolition of houses as a means of punishment is not a “military operation.” International law also explicitly prohibits acts of collective punishment on a population under occupation, in addition to acts of reprisal and the use of intimidation.

The rejection of the petitions came on the day that Palestinians leaders acceded to the Rome Statute, under which the International Criminal Court will bear the right to investigate in the violations of war law committed in West Bank.