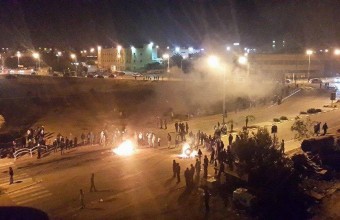 Clashes broke out, Monday, between hundreds of Palestinian youth and Israeli forces, following the funeral of 47-year-old Sami Ziadna, who was recently killed by Israeli forces.Ziadna, Sunday evening, was pronounced dead due to teargas asphyxiation, which Israeli police fired at the mourners in the funeral of Sami Ja’ar (20), who was also killed by Israeli police last Wednesday, PNN reports.

In the midst of tension and rage, hundreds of Palestinians crowded together to mourn Ziadna’s death. Israeli forces then intensified their units on the entrance of the city, and attacked the attendees.

Clashes subsequently broke out, upon which soldiers employed intessive teargas grenades and sound bombs against the mourners.

Ziadna was buried in the family cemetery. The city declared a state of mourning for Tuesday.

Furthermore, leaders of Israel’s 1.7 million Palestinians declared a general strike throughout the country on Tuesday, in protest.

According to AFP, former member of parliament Taleb al-Sana, chairman of an umbrella organization of Arab-Israeli groups, said that schools and businesses would close from the Galilee to the Negev.

‘The general strike today is to send a strong message that the entire Arab community … strongly protests the murders of two citizens of the state of Israel whose only crime is being Arab,’ Sana, himself of Bedouin heritage, told Israeli army radio.

Sami al-Jaar died of a gunshot wound, last week, during an alleged drug raid on Rahat.

Rahat residents have been on strike since Sunday.